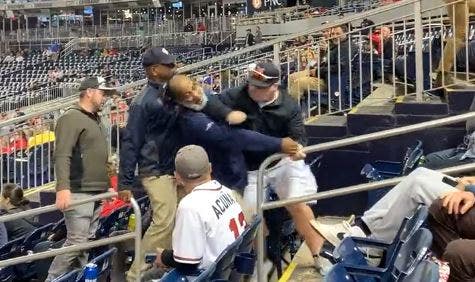 A Washington DC firefighter is on administrative leave after a viral social media video shows him punch an usher at Nationals Park during Tuesday night's game between the Nationals and the Atlanta Braves.
Metropolitan police identified the man as 54-year-old Christopher Sullivan, of West Virginia.
He was arrested and charged with assault after video shows him yelling obscenities and then punching an usher who was trying to escort him out of the park.
The fight began when an usher asked Sullivan, who was sitting in a section he didn't have a ticket for, to return to the seat on his ticket.
Sullivan was reportedly asked to return to his seat multiple times before he was eventually told he had to leave.
NATIONALS PLAYER SENDS GIRL BASEBALL AFTER INCIDENT WHERE GROWN MAN ROBBED ONE FROM HER AT GAMESpectators in the video can be heard yelling "get out of here, dude" and "you've gotta go."
WASHINGTON, DC POLICE OFFICERS UNDER INVESTIGATION AFTER CONFISCATING GUNS WITHOUT MAKING ARRESTSSullivan is a firefighter with DC Fire and EMS, but was already on administrative leave with pay for an incident that occurred on Aug. 31, Fox 5 DC reported.
The outlet received the following statement from the department:"The actions witnessed in the video are absolutely unacceptable.
Prior to this incident, the individual was on administrative leave with pay, pending the outcome of an internal personnel process.
He will remain on leave as our internal investigation into this matter continues."
Sullivan was reportedly fired from the department "several years ago," but was then reinstated, according to NBC Washington.
CLICK HERE TO GET THE FOX NEWS APPThe Nationals banned Sullivan from the ballpark for five years following the incident.